We had a very exciting collaboration theater production with Moscow International Film School (MIFS) in late December. Thirteen people were from MIFS in the middle of December. We played two dramas. One is “Oleysha” which was written by Kuplin, Russian novelist born in 19th century. MIFS students focus on the prejudice towards social minority people and how do we live with this situation. Shure University students played “The Parrot Training” written by Tagore, Indian poet of 19th century. Shure University students focused on the issue of self-determination in education.

We had three shows: two shows on Saturday and one on Sunday. After Sunday show, we had a post performance talk. The student directors and actors and staff members and the professional actress and director had a cross-talk. Then we had a party in which everybody could join. Quite a few audience participated and talked with performers and stage staffs. One of the MIFS students said before he came to Tokyo for this production, he felt MIFS was kind of isolated islands of freedom of expressions but here at Shure Univeristy, he feels another place of freedom of expression. Now he feels there may be more of those in the world. 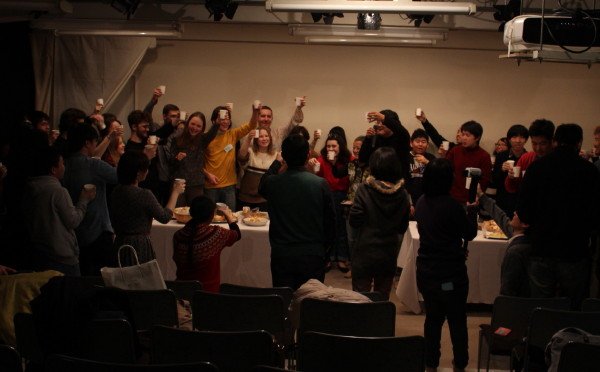